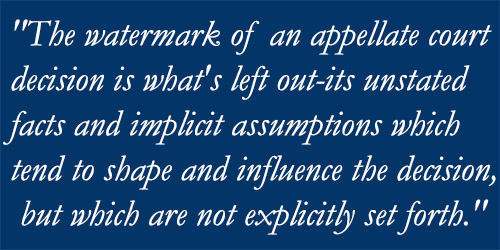 Signet and watermark—the visible and invisible, the seen and unseen. While this pattern can be found in a variety of contexts, it’s most certainly present in the law. In fact, this hidden duality is one aspect of the law which is often ignored, but which when made explicit can explain a great deal.

Signet. A law which prohibits an employee from working greater than 60 hours a week is unconstitutional since it violates the liberty to contract guaranteed under the Due Process Clause of the Fourteenth Amendment.

Watermark. The US economy is growing—and we’d like to keep it growing—and in such an economy, where markets are presumed to be free, government does not have the power to set the terms of a private employment contract. Or stated more bluntly—people should be allowed to enter into private contracts setting the number of hours per week they wish to work.

The watermark of an appellate court decision is what’s left out—its unstated facts and implicit assumptions which tend to shape and influence the decision, but which are not explicitly set forth. Every case has a watermark, often hidden or obscured but present nonetheless. The trick is to identify it, and then to assess its relevance.

Typical watermarks include the time, place, and social circumstance in existence at the time the decision was written, and the unstated facts which underlie the decision as well as the unstated assumptions as to how those facts are to be perceived and evaluated. Notice that for both unstated facts and unstated assumptions there is no predetermined metric as to how significant a role these should play in the outcome. In some cases such implicit aspects play a very small role; in others, very large. Nor is there any rule which can reliably predict when such implicit aspects will come to assume importance.

In Death in the Afternoon, Ernest Hemingway famously expressed the writer’s task as knowing when to leave out information, trusting the reader to complete the rest: “The dignity of movement of an ice-berg is due to only one-eighth of it being above water.” If seven-eighths of a legal opinion lurk below the surface, it’s easy to see why commentators tend to simplify outcomes, ascribing political or other motives to explain a decision when in fact the reality may be far more complex and multi-layered.

A typical appellate case begins with a recitation of the facts, but those facts are necessarily incomplete, and at times inaccurate. The record on appeal, consisting in part of transcripts of testimony, can be a partial or fragmentary explanation of the truth. Often what’s missing from the record is that which is most essential. And even agreed-upon facts can harbor an unspoken subtext.

Signet and watermark—the visible and invisible, the seen and unseen—in the evaluation of a legal decision, there’s more than meets the eye.