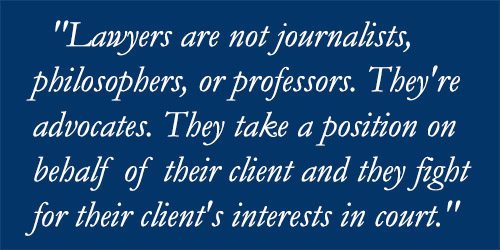 I was in court recently and saw a lawyer and his client standing before a Judge. The Judge asked the lawyer’s client a question and the client gave an answer that was not to the lawyer’s liking. The lawyer, surprised at his client’s answer, appeared visibly upset and angry. The lawyer turned around and  ostentatiously glared—for a period of several seconds—at his client in disbelief, as if the client had committed some kind of offense.

What follows is meant to be constructive, not critical, but a number of observations.

First. Why didn’t the lawyer speak to his client before court so that he could have reasonably anticipated the Judge’s question and thus could have made himself aware of the answer the client was likely to give? Simply put, the lawyer was unprepared. He should have known ahead of time what the client’s answer was going to be and thus prepared for it properly rather than turning around in anger when hearing it for the first time in court.

Second. Did this lawyer give any thought as to how the client must have felt? Clients are not legally trained—that’s why they’ve hired a lawyer. Standing there, she probably felt she was no longer being represented. She was now on her own. It was merely a conversation between her and the Judge, with the lawyer no longer being one she could depend on to advance her interests.

Third. What was this lawyer doing turning angrily on his own client in open court? A lawyer’s obligation is to advocate for his client’s position. A lawyer does not turn on his client when a surprising or  unexpected answer emerges. He continues to stand by his client and continues to make every effort to advance his client’s interests. At the very least, he does not put his client in an awkward or adversarial position by implying with angry facial expressions that the client has made an error or otherwise done something wrong.

Lawyers are not journalists, philosophers, or professors. They’re advocates. They take a position on behalf of their client and they fight for their client’s interests in court. They do so within certain rules, but their overriding responsibility is to their client.  A client must know at all times that their lawyer has their back. Some attorneys mistakenly assume their clients hold this belief but a lawyer must actually demonstrate this to the client—by deeds and words—that this is so.

It may seem a small matter to some that the lawyer that day reacted in the manner he did; after all, he was just responding instinctively to a statement he was not expecting to hear. But his actions showed his mind was more focused on himself, not his client. If he were thinking at every step of his client’s best interests, his reaction that day would likely have been quite different. A small matter, but a symptom perhaps of something larger—a basic lack of understanding of why he was even there.