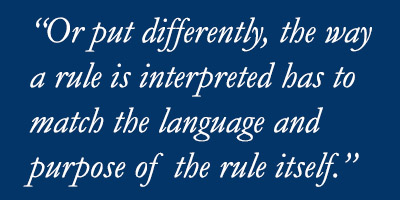 orth certain requirements, but every rule is subject to interpretation and application to the specific facts of the case. Say you are seeking a ruling from a Court to depart slightly from the literal requirements of a rule. The rule says one thing, but you are urging some flexibility in the way the rule is to be interpreted and applied.

What’s the best method to advance such an argument? Simply suggesting a more “reasonable” interpretation will often not work since the Court is provided with no rationale to justify departing from the terms of the rule. After all, the rule was put into place for a purpose.

But there are other methods as well. For example, one can set out for the Court the extremes—arguing that rule would lead to impractical or irrational results if it were interpreted and applied in a manner other than what’s being suggested. That is, one can hypothesize the rule’s language to be utterly inflexible, and point out the impracticalities and difficulties of such an approach. Then, in the alternative, one can hypothesize the rule’s language to be somewhat more flexible, and point out why the purposes sought to be achieved by the rule are best advanced by this more adaptable approach.