“Congress shall make no law respecting an establishment of religion, or prohibiting the free exercise thereof; or abridging the freedom of speech, or of the press; or the right of the people peaceably to assemble, and to petition the government for a redress of grievances”—so reads the First Amendment of the Constitution. 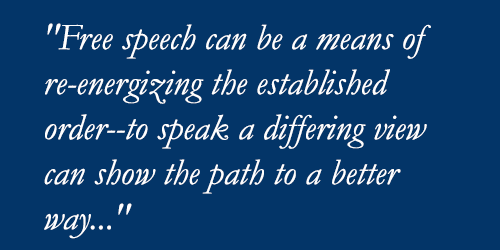 Free speech is thus preserved in the most emphatic language—Congress shall make no law. But why such emphasis on this one area? After all, some may question, if there were “reasonable” restrictions placed on the very worst forms of speech, would not such be of some benefit to the social order?

The reason free speech remains sacrosanct is a bit more than subtle than is commonly recognized. It’s of course designed to allow dissenting opinions, to permit vocal criticism of people, practices, and institutions. But there are other benefits as well.

Avoidance of drift, inertia. It’s easy over time for established institutions to become arthritic and ossified. Things that worked in the past tend to be unthinkingly accepted, without the benefit of new ideas or ongoing scrutiny. Free speech says it’s okay to periodically take a fresh look at things—to evaluate searchingly the established order to see if practices can’t be improved from the ground up.

Prevention of sloth, lassitude. Tired, time-hallowed practices can lead to indolence. What starts out as a good idea can over time become enervating, devitalizing. Free speech can be a means of re-energizing the established order—to speak a differing view can show the path to a better way, as if to cast a light in darkness to reveal an easier, faster, or more accurate course.

Free speech improves public safety. When people can speak freely, dangerous products and practices can be exposed—and steps can be taken in response to prevent their spread. Some societies insist upon a culture of silence as a formal show of respect. Free speech disavows such practices and insists that noxious acts and behaviors be timely addressed and uprooted. As well, free speech is beneficial not only as a break on harmful practices but as an ongoing check to maintain those things which continue to work well.

“The framers of the constitution knew human nature as well as we do. They too had lived in dangerous days; they too knew the suffocating influence of orthodoxy and standardized thought. They weighed the compulsions for restrained speech and thought against the abuses of liberty. They chose liberty.” Beauharnais v.Illinois, 342 U.S. 250, 287 (1952) (Douglas, J. dissenting).

Along with liberty, there’s also the matter of identity. To be idiosyncratic, unconventional, quirky—these are individual choices which the First Amendment protects. At its most basic, free speech resists at every turn one of the most insidious reasons why societies fail—blind adherence to conventional thought merely because such has been accepted over time by those in power.