Institutions, such as hospitals or large corporations, publish rules to be followed by their staff. One reason such standards exist is to promote some degree of certainty and uniformity. Also, these rules are meant to conform behavior to a more optimal level which, were it not for the rule, might not be routinely practiced. All such rules have consequences, but a few tend to work at cross purposes. 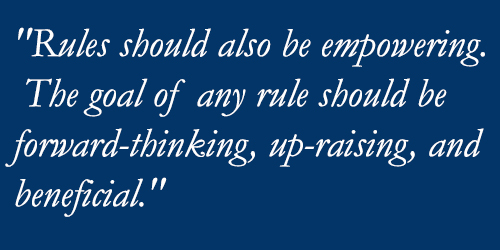 Take, for example, a hospital rule requiring the periodic monitoring and charting of a patient’s vital signs—blood pressure, pulse, respiration, and temperature. This is an example of an informational rule; that is, a rule that requires the acquisition and charting of certain categories of patient information. Such rules are ubiquitous in the medical field and for good reason—they help to create a real-time medical snapshot of the patient’s condition.

Take another example. A rule that requires certain action to be taken in the face of a range of abnormal findings. This is an example of a behavioral rule; that is, a rule that requires certain behavior to take place under certain circumstances. Both sets of rules are beneficial; they each have their place and purpose. But behavioral rules and informational rules can at times work at cross purposes. Someone who is mechanically taking the time to acquire certain categories of information may not be recognizing that prompt action is required in the face of a variety of abnormal findings.

This “rule confusion” is not limited to hospitals. It applies to any complex enterprise where many variables must be obtained, assessed, and timely acted upon. Is there a way to reconcile these? There is. But the secret is to recognize that it’s not by creating more rules. It’s by setting out and communicating the ultimate goals to be achieved in a specific area and then defining the responsibilities of those tasked with carrying them out broadly enough so as to encompass any contingency. This is why many hospitals simply train their nurses to be “patient advocates.” Such a broadly phrased role encompasses everything that might possibly be encountered.

Some of the best rules are those that are self-effectuating—where both the informational component and behavioral component are combined. In the legal field, particularly at the appellate level, advocates essentially argue for the “rule of the case”—answering the question: under these set of facts, what rule should govern? A rule that’s impractical, onerous, overly-complex, or inconsistent with other rules will likely not carry the day. Rules should feel natural, they should make theoretical and practical sense, they should be unambiguous and easy to carry out.

Rules should also be empowering. The goal of any rule should be forward-thinking, up-raising, and beneficial. Or another way of thinking about this is simply to ask—can the rule be abolished? If the answer is yes, then it should be.