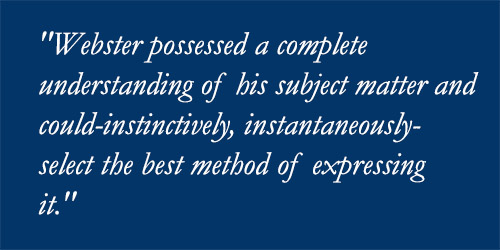 “In a million you would single him out”—so wrote Ralph Waldo Emerson of Daniel Webster.

Emerson admired Webster and wrote about him at length in his Journals. Emerson wrote that Webster was “[a] person of very commanding understanding with every talent for its adequate expression.” Emerson took note of Webster’s appearance, writing: “His external advantages are very rare & admirable; his noble and majestic frame, his breadth & projection of brows, his coalblack hair, his great cinderous eyes, his perfect self-possession, and the rich and well modulated thunder of his voice (to which I used to listen sometimes, abstracting myself from his sense merely for the luxury of such noble explosions of sound,) distinguish him above all other men.”

Emerson also paid close attention to the manner and method by which Webster would make his points. “In speech he has a great good sense, —is always pertinent to time and place, and has an eye to the simple facts of nature,—to the place where he is, to the hour of the day…but very sparingly notices these things, & clings closely to the business part of his speech with great gravity & faithfulness.” ““I do not inflame,” he said on one occasion, “I do not exaggerate, I avoid all incendiary allusion.”” “He trusts to his simple strength of statement, in which he excels all men,—for the attention of his assembly.” “His statement is lucid throughout & of equal strength.” “He has great fairness & deserves all his success in debate, for he always carries a point from his adversary by really taking superior ground…” “There are no puerilities, no tricks, no academical play in any of his speeches,—they are all majestic men of business. Every one is a first-rate Yankee.”

We can derive from these observations some of the reasons why Webster was considered to be such an  outstanding advocate. Webster possessed a complete understanding of his subject matter and could—instinctively, instantaneously—select the best method of expressing it. He used simple and irresistible speech that was sincerely and forcefully expressed. He was able to  articulate powerful ideas without embellishment, trusting the compelling force of a properly phrased statement. He spoke as a patriot, an American, specific to his time and place. He avoided sarcasm, deception, jargon, obfuscation, exaggeration, and other unprincipled contrivances. Webster took the high ground, appealing to the intellect and reasoning of his listeners. “The American, foreigners say, always reasons, and he is the most American of the Americans.” He was able to control both his voice and demeanor, and could modulate at will his emotions and thoughts. Even his physical appearance worked to his advantage. And finally Webster had that indefinable quality, a combination of sincerity and power, genuineness and gravitas, that could seize and hold attention.

What can we take away from Emerson’s thoughts on Webster? A person of very commanding understanding with every talent for its adequate expression—perhaps that one short phrase best expresses the essential qualities required of any superb advocate.